The great sage Patanjali gave to mankind 196 aphorisms which are known as the Yoga Sutras of Patanjali. It is here that the system of Ashtanga Yoga is mentioned. Ashtanga in Sanskrit means - 8 limbs, where Asht means Eight, and Anga - means Limbs. Yoga is thus not just a set of mere physical postures, it is not a religion, but rather a path to the art of right living, a system which leads you into a state of well being.

Yama, the first limb is to do with how we conduct ourselves in everyday life. It lays emphasis on five principles, them being

Niyama, the second limb is to do with observing personal disciplines which shape one's life towards reaching the higher goal
Asana, the third limb is to do with physical postures which help in bringing about a sense of well being, helping in aiding the body to be healthier, and flexible. A healthy body is thus instrumental in moving towards the later stages of Ashtanga yoga.

Pranayama, the fourth limb is to do with extension of the life force (prana) and breath control. Pranayama means extension of the life force. Most of us do not give the required attention to our breathing pattern, which results in shallow breathing. Shallow breathing deprives the body of the desired amount of oxygen, leading to a loss of energy, resulting in improper disposal of waste from the body and failure of regeneration of the cells and tissues. Through the practice of pranayama one is benefited by improved lung capacity due to correct breathing patterns, resulting in healthier mind and body.

The first four limbs of this path help in setting stage for the next 4 limbs, which is the second half of the journey towards one's true self.

Prathyahara, the fifth limb is to do with the withdrawal of the senses from its objects, both external and internal. It is a practice of training the senses to detach from both external as well as mental impressions. When this begins to happen one eventually delves into greater depths of meditation.

Dharana, the sixth limb is to do with concentration or fixing the attention of the mind onto one single object or place. When the mind becomes more settled by the continuous practice of the above 5 limbs, then Dharana begins to happen. Even a few brief moments of positive gentle focus and concentration of a single object add up, and help one to get into deeper meditation eventually.

No effort is wasted, every bit of practice adds up, taking one a little bit further on this journey. Truth awaits one who does not give up, rather takes you that much closer with each step you take. 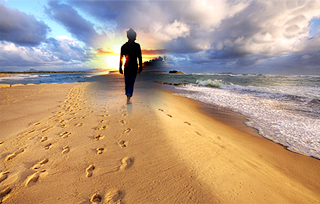 Dhyana, the seventh limb is to do with the uninterrupted flow of concentration. Here the one who meditates, the act of meditating and the object being meditated upon remain distinct. In this stage, there are no external or internal distractions.

Thus this eight limbed path is a means by which one can possibly get a glimpse of the higher dimensions that exist and the truth may thereby be revealed.

As said by the great sage Vyasa -"Yoga is to be known by Yoga, and Yoga itself leads to Yoga"