Our Cells Respond to Sound 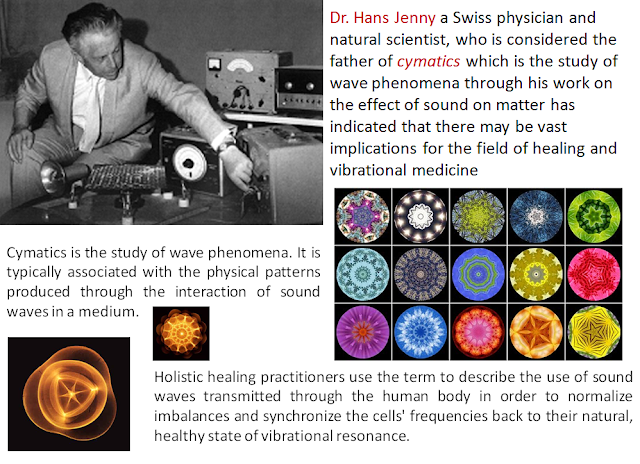 If sound can change substances, can it alter our interior landscape? Since patterns of vibration are ubiquitous in nature, what role do they play in creating and sustaining the cells of our own bodies? How do the vibrational patterns of a diseased body differ from the patterns the body emanates when it is healthy? And can we turn the unhealthy vibrations into healthy ones? While Dr. Jenny did not focus on the healing possibilities of sound and vibration, his work inspired many whose destiny it was to do just that.


Of those who did Fabien Maman is one such, who created a visually compelling evidence of the power of sound. Maman, a French composer, acupuncturist and bio-energetician, and Helene Grimal, a biologist, experimented with both healthy and cancer cells to see how they would respond to the voice and to various instruments. 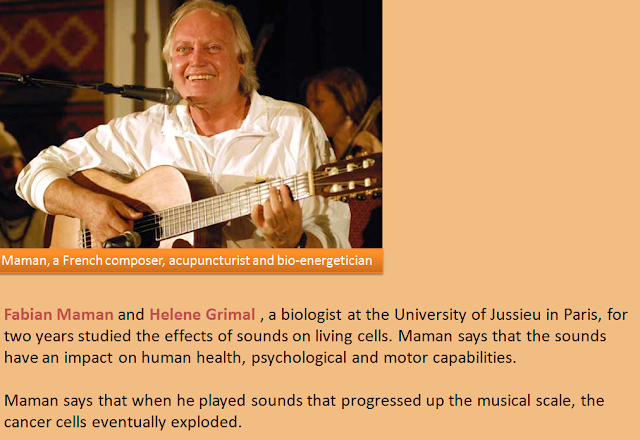 In his book The Role of Music in the Twenty-First Century, Maman reports that among the dramatic effects of sound they captured in their photographs was the progressive destabilization of the structure of cancer cells. Maman says that when he played sounds that progressed up the musical scale, the cancer cells eventually exploded. 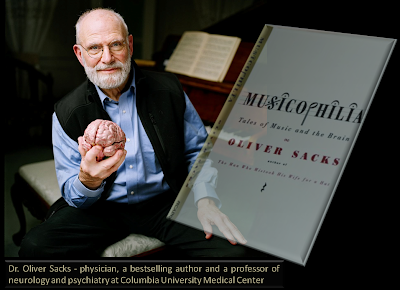 Dr. Oliver Sacks who is a physician, a bestselling author and a professor of neurology and psychiatry at Columbia University Medical Center has authored a book among many others called Musicophilia where he details the effects of music on one’s brain and how it can have a positive effect on people suffering from Dementia and various other brain disorders.

So the people who have researched into this field have enough reasons to indicate that various sounds have a huge impact on one's well being which takes us back into the times when the great sages chanted and taught the Mantras or simply the sacred chants which have known to have a great effect on the person's body, mind and spirit. This probably is one of the very reasons why this practice has been evident in so many of the traditions across the world.

A Mantra is a sound, syllable, word, or group of words that is considered capable of "creating transformation". When a mantra is chanted in rhythmic tone with ups and downs, it creates a melodious effect in the body. The constant repetition causes the production and spreading of curative chemicals in the brain. These curative chemicals then give a smoothening and curing effect in the body. Thus mantra chanting is no way a superstition. It can also be directly called as music therapy or mantra therapy in today’s world.

Many of the mantras that are known to mankind have been constructed in the Sanskrit language, which is the purest form of language that exists from the ancient times, having its origins in India. 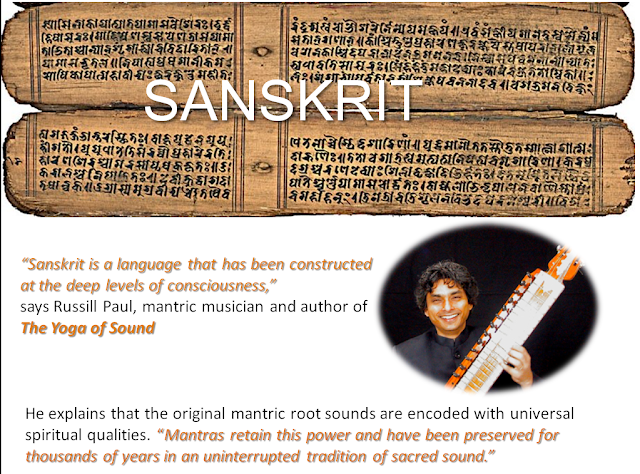 The sounds are specially constructed to penetrate the analytical mind and affect our nervous system very directly. In this sense, they are a short cut, and are like spiritual pharmaceuticals that enter into our soul with palpable physiological effects. It is this capability that gives mantras the very specific therapeutic and spiritual properties that are missing in our everyday language.

Even if we don’t understand the meaning of the mantra, it tunes into our subconscious mind. Often we do not need to translate the meanings of the mantra, as they work their magic on a subtle level and not an intellectual level. 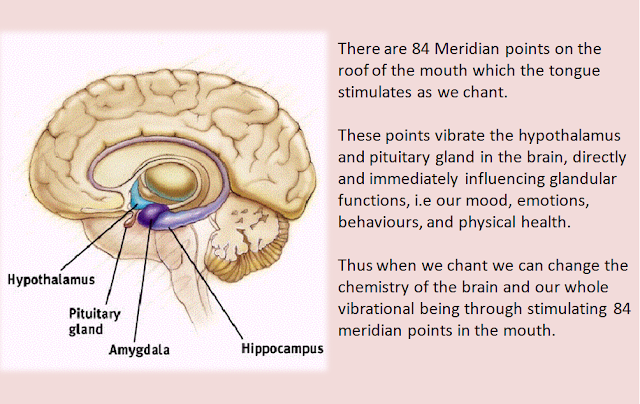 The phonetics of Sanskrit also creates the most effective mouth reflexology, but it is important to get the pronunciation right. So as we chant, we stimulate energy in the meridian centres of the mouth which then awaken dormant parts of the brain and circulate energy through the body.

Due to the benefits seen modern doctors advise the people under high tension to sit and listen to music or mantras for few minutes. This has become an accepted procedure just like the yoga asanas (physical postures) and Pranayama practices (breath-work).

A research done by Alfred Tomatis of the French Academy of Science and Medicine found that chanting sounds have a therapeutic effect on the body. It soothes all our bodily systems and activates the body’s natural healing process. It also plays a part in reversing heart disease.

A study by Dr Alan Watkins [senior lecturer in neuroscience at Imperial College London] revealed that while chanting, our heart rate and blood pressure dip to its lowest in the day. Using chants as part of our exercise regimen, helps facilitate movement and flow of the body during exercise. 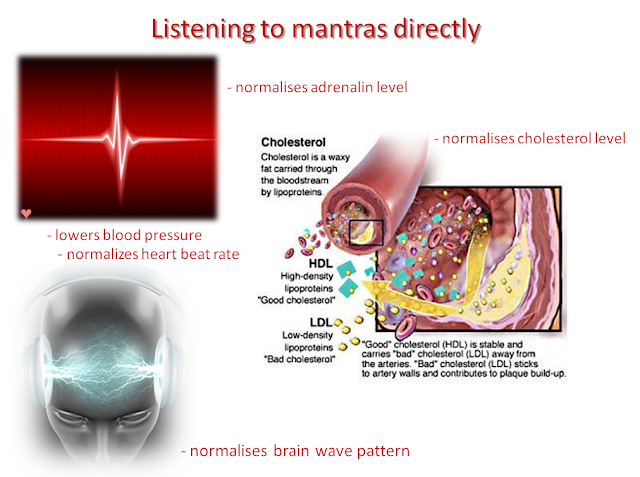 Neuro-scientist Marian Diamond from the University of California found that chanting helps block the release of stress hormones and increases immune function. It also keeps our muscles and joints flexible for a long time. The body’s energy and vitality are augmented by regular chanting. 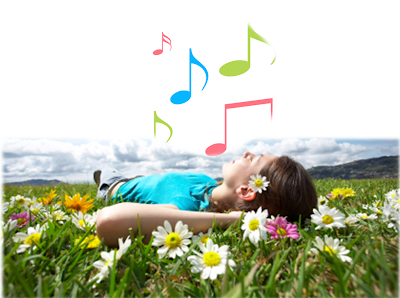 Dr Alan Watkins says when we chant, the vibration of the sound calms the nervous system and a profound sense of peace is obtained. It also de-stresses and facilitates better concentration and memory power.

According to Dr Watkins, chanting promotes a sense of well-being and helps us bond better with people around us, especially when practiced in a group. Chanting enhances our good virtues, by eliminating negative thoughts. It helps control our mind and emotions. Alfred Tomatis goes on to highlight that chanting aids in getting over addictions like smoking, alcohol and drugs.

Mantra tunes us into the universal life force energy – the prana - and we can direct the healing flow of prana to wherever it is needed in the body.

Thus when we chant we tap into universal consciousness, this fuels us to go beyond conditioning, beyond addictions, beyond illusions. “Chanting is a sort of ‘Divine therapy,’ a means of cleansing the soul of unwanted psychic residue, and a process that has corresponding physiological effects. 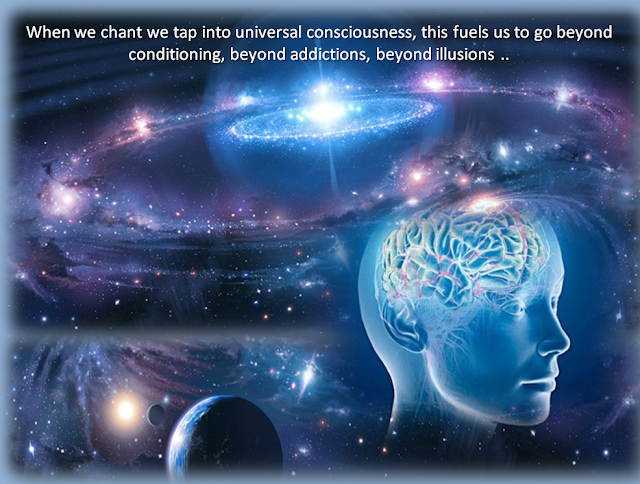 When the mantra resounds in every atom of our being , when every single nerve resonates with sound,  – we can then begin to tune into an inner sound current of ‘anahat’ meaning the ‘unstruck melody’.